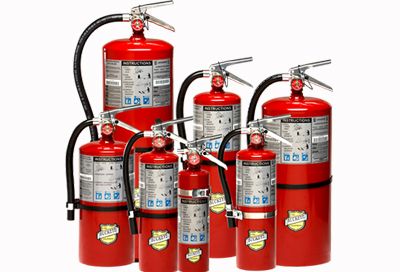 Fire Extinguishers: How Do They Work?

The Science of Fire

Fires start when heat and oxygen react with a fuel, which can be anything from wood or building materials to a variety of flammable liquids and gases. Putting out a fire requires the removal of one or more of these three essential components; fire extinguishers generally attack either a fire's heat or oxygen, or both. Once heat or oxygen is removed from the equation, a fire will quickly begin to diminish until it is extinguished completely.

All fire extinguishers are essentially large aerosol canisters that contain pressurized fire-fighting materials, but a few varieties of extinguishers exist for tackling different kinds of fires. Some extinguishers use water as their primary active ingredient, which fights fires by rapidly cooling the flames. Water extinguishers are mostly useful for fires that burn using dry fuel, where no flammable liquids are present.

Fire extinguishers are an important component of public safety and are required for complying with safety codes and laws. Apartment Fire Extinguisher Service, Inc. provides a wide range of fire protection products and services to Jacksonville-area businesses. Contact us today at (904) 398-2030 to learn how we can help you improve your business's fire safety practices.